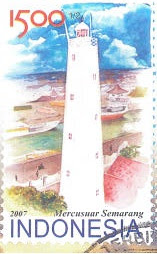 Semarang Lighthouse is located at the Tanjung Emas Harbour of Semarang, the capital city of Central Java Province and major port of Central North Java.  This lighthouse plays significant role to guide Marine traffic entering the harbour since it was built in 1879.
Indonesia commemorated the Semarang Lighthouse by the release of stamp of value Rp 1500 on 17-Aug-2007.
Built in the year 1883, the SEMARANG Lighthouse:
Posted by K Sridhar at 4:44 AM 2 comments: 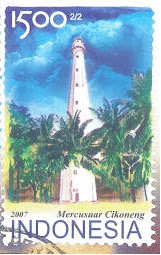 Cikoneng Lighthouse,  the second oldest lighthouse in Indonesia, is located near Anyer Kidul on the East shore of Sunda Strait, overlooking the active volcano Krakatoa.  This is one of the few Indonesian lighthouses readily accessible to tourists.  The original lighthouse was destroyed on 27-Aug-1883 by the catastropic explosion of the Krakatoa Volcano which triggered a tsunami.  The tsunami with waves of 100 ft. high oblitered all traces of the original light station.
Indonesia commemorated the Cikoneng Lighthouse by the release of stamp of value Rp 1500 on 17-Aug-2007.
Built in the year 1885, the CIKONENG Lighthouse:
Posted by K Sridhar at 4:43 AM No comments: 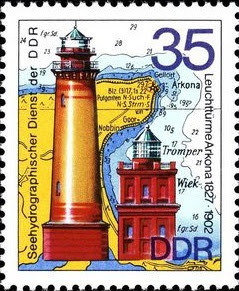 Cape Arkona, the Northern tip of Rugen, is the most prominent and dangerous Cape on Germany's Baltic coast.  The Kingdom of Prussia built this Light station as early as 1828.
The German Democratic Republic (DDR) commemorated the Arkona Lighthouse by the release of 35 Pf - Pfennig stamp on 7-May-1974.
Built in the year 1827 & 1902, the ARKONA Lighthouse:
Posted by K Sridhar at 11:40 PM No comments:
Newer Posts Older Posts Home
Subscribe to: Posts (Atom)