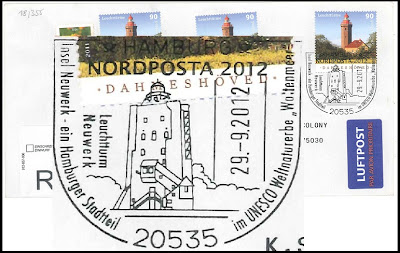 The UNESCO WHS 'Wadden Sea' Neuwerk Lighthouse is pictured in the Philatelic Temple of Arms Postmark released by Deutsche Post to commemorate the Nordposta Hamburg 2012, a North German Postage Stamp Exhibition at Rank 3 held from 28th to 30th September 2012.

Neuwerk is an island in the North Sea.  It is located North-West of Duhnen.  Built as a Watch-tower in 1300 by Hamburg, this Lighthouse is the oldest building on the German Coast.  As a day beacon, it has served for 500 years and then, got converted to a Lighthouse by the addition of a large lantern on the roof.  It is now a National Historic site.  The Lighthouse is located at the Southern end of the Island and it is accessible by passenger ferry from Cuxhaven.

This is one of the Lighthouse on the North Sea coast in the Cushaven area of Germany and along the South side of Elbe estuary in the Stade District, downstream from Hamburg.

Established in 1814, the NEUWERK Lighthouse:
My sincere thanks to Wolfgang Beyer from Germany for sending me this German Post Mark of Neuwerk Lighthouse.
Posted by K Sridhar at 2:55 AM No comments: 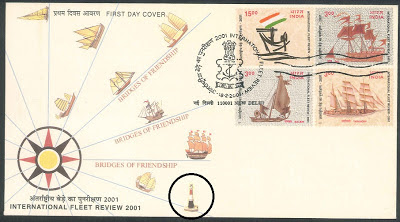 Colaba is a part of the city of Mumbai, India.  The area that is Colaba was originally a region consisting of two islands viz., Colaba and Little Colaba.  The island of Colaba was one of the seven islands of Mumbai ruled by the Portuguese.

Prongs Lighthouse is one of the three Lighthouse(s) in the Mumbai Harbour.  The others being, Sunk Rock Lighthouse and Dolphin Lighthouse.

The Prongs Lighthouse (encircled in the FDC) was picturized in the International Fleet Review First Day Cover cachet released by India Post on 18-Feb-2001 .

The Trinity Lighthouse at Europa Point (encircled in the stamp) was commemorated by Gibraltar Post in its Europa 2012 (Visit Gibraltar) stamp issue with the release of a 44p stamp on 15-Jun-2012.

The details about the Lighthouse is available in my earlier post #0185...
Posted by K Sridhar at 11:06 PM No comments: 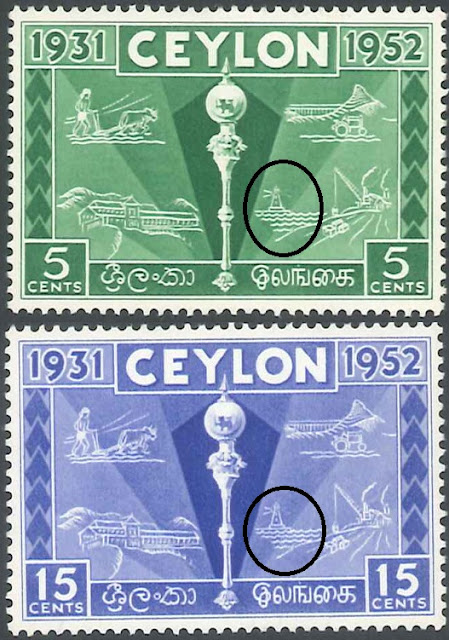 The two stamp(s) valued 5 cents and 15 cents were released by Ceylon Post to commemorate the opening day of the Colombo Plan Exhibition on 23-Feb-1952. Twin stamp(s) depict a Lighthouse.

Colombo Plan is a regional organization born out of a Commonwealth Conference of Foreign Ministers held in Colombo, Sri Lanka (erstwhile Ceylon) in January 1950.  It embodies the concept of collective inter-governmental effort to strengthen economic and social development of member countries in Asia-Pacific region.  The primary focus of all Colombo Plan activities is on Human Resources Development.
Posted by K Sridhar at 12:35 AM No comments: 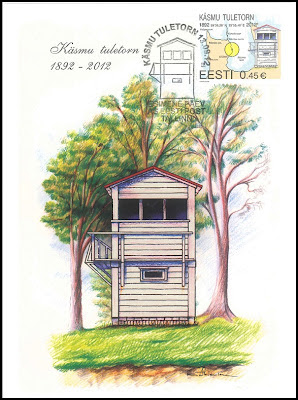 Eesti Post commemorated the Käsmu Lighthouse with the release of Maxim Card on 13-Sep-2012.  This is the 22nd stamp in the Eesti Post's Lighthouse Stamp Series.

The detail(s) about the Käsmu Lighthouse is available in my earlier post #0177...
Posted by K Sridhar at 3:10 AM No comments:

The Europa Point Lighthouse, also referred to as the Trinity Lighthouse at Europa Point and the Victoria Tower, is one of several Lighthouses in Gibraltar.  The Lighthouse is located at the extreme Southern tip of the Gibraltar (Iberian) peninsula, with the Mediterranean Sea to the East, the Bahia de Algeciras to the North-West and the Strait of Gibraltar leading South-West to the Atlantic Ocean.


This Lighthouse is one of the few lighthouse(s) can claim such a dramatic and strategic location.

The Trinity Lighthouse at Europa Point was commemorated by Gibraltar Post in its Europa 2012 (Visit Gibraltar) stamp issue with the release of a 54p stamp on 15-Jun-2012.


Built in the year 1841, the TRINITY (Europa Point) Lighthouse:
Posted by K Sridhar at 3:04 AM No comments:

Jersey, the largest of the Channel Islands, located off the West coast of France's Cotentin peninsula.  Together with a scattering of small islets and reefs, it forms the Bailiwick of Jersey.

Corbière Lighthouse is the first British lighthouse to be built using concrete.  The Lighthouse is perched atop a rock just off the South-Western tip of Jersey.  The Lighthouse is accessible by a causeway at low tide, but visitors must take care not to be stranded when the tide returns.  The Lighthouse  is one of the most photographed landmarks in Jersey, a popular tourist site for its panoramic views, in the evenings the surrounding area provides a ideal viewing point for sunsets.

Corbière Lighthouse was commemorated by Jersey Post in its "Simply Jersey" definitive stamp(s), wherein the stamp(s) depict four of Jersey's many Coastal Landmarks.  The stamp(s) were four new non-value indicator self-adhesive stamp(s) released on 8-May-2012.  Two of the stamp(s) are for use in Jersey and two for use between Jersey and the UK.

Built in the year 1874, the Corbière Lighthouse:
Posted by K Sridhar at 2:45 AM No comments: 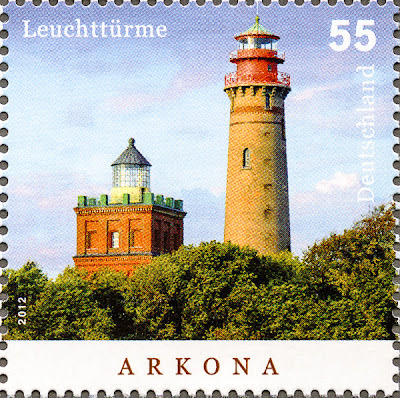 Arkona Lighthouse was commemorated by Deutsche Post with the release of 55 Euro Cent stamp on 12-Jul-2012.

The details about the Lighthouse is available in my earlier post #0049...
Posted by K Sridhar at 11:00 PM No comments: 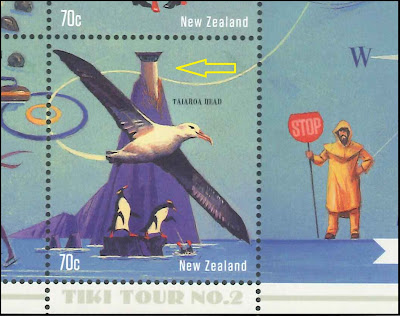 The Lighthouse is located at the North-Eastern tip of the Otago Peninsula about 32 km North-East of Dunedin, marking the entrance to Otago Harbour.  The Lighthouse viewing is closed during the Albatross nesting period from mid September to late November.

Taiaroa Head was named after the leader of the Ngai Tahu Maori tribe, Te Matenga Taiaroa.

Taiaroa Head Lighthouse was highlighted in the Tiki Tour of New Zealand No.2 stamp sheet released by New Zealand Post on 4-Jul-2012.

Built in the year 1865, the TAIAROA HEAD Lighthouse: 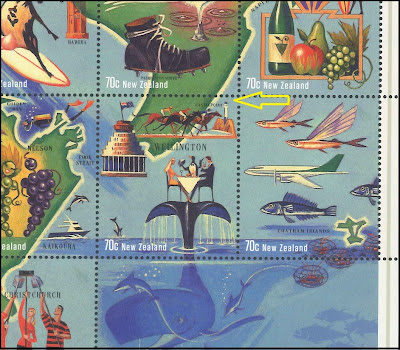 The Lighthouse built in 1913 was originally fueled by oil.  In 1954, the oil lamp was replaced with electric powered by diesel generator.  In 1961, this was replaced by a connection to the electrical mains grid.  The Lighthouse and the Castle Point beach were popular tourist attraction and acquired the nickname The Holiday Light.  The light was fully automated in 1988 and it is owned and operated by Maritime New Zealand.

Castle Point Lighthouse was highlighted in the Tiki Tour of New Zealand No.2 stamp sheet released by New Zealand Post on 4-Jul-2012.

Built in the year 1913, the CASTLE POINT Lighthouse: 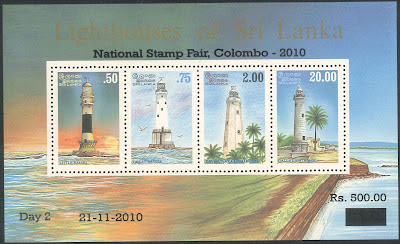 My sincere thanks to D.P. Jayathillake from Sri Lanka for sending me this Overprint Lighthouse Miniature Sheet. 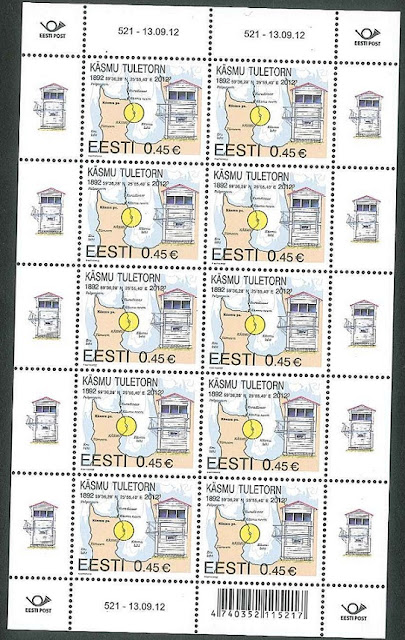 Eesti Post commemorated the Käsmu Lighthouse with the release of Sheetlet on 13-Sep-2012.  This is the 22nd stamp in the Eesti Post's Lighthouse Stamp Series.

The detail(s) about the Käsmu Lighthouse is available in my earlier post #0177...

My sincere thanks to Aare Kärner from Estonia for sending me this Sheetlet of Käsmu Lighthouse.
Posted by K Sridhar at 10:20 PM No comments: 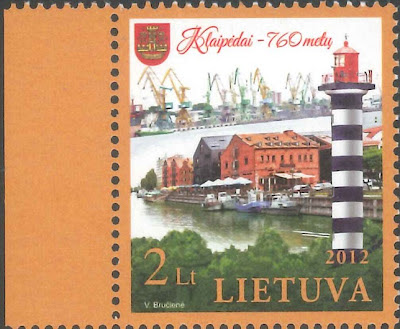 Klaipeda had no Lighthouse till 18th century.  To guide the ships to the Dane Harbor, the first Lighthouse was built only in 1796 and it was rather short.  The lighting contraption was made up of 6 bronze reflectors, which reflected light about 4 kms only.  In 1819, the Lighthouse was heightened with very modern lighting system.  This time, boats could see the lighting signal even beyond 30 kms.

There were various optical signals in the Lighthouse.  If a red flag was displayed from the tower, it informed the boats that entrance to the harbour at this time was dangerous.  A yellow one, its safe to sail.  From 1937, the Lighthouse started sending radio signals

Before, World War, the Lighthouse was painted in Red and White squares, which is why it was referred to as Red Lighthouse.  But, currently, it was painted Black and White horizontal bands.  At the end of World War II, the lighthouse got destroyed and subsequently it was re-built and upgraded.

To commemorate the 760th anniversary of Klaipeda (formerly known as Memel), the oldest city in Lithuania, Lithuanian Post  released a 2 Litas stamp of the  Klaipeda Lighthouse  on 14-Jul-2012.

Re-Built in the year 1953, the KLAIPEDA Lighthouse:

My sincere thanks to Vidmantas Stilius from Klaipeda, Lithuania for sending me this Klaipeda Lighthouse Stamp.
Posted by K Sridhar at 11:29 PM No comments: 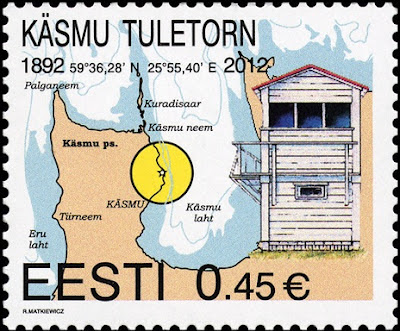 The Käsmu Lighthouse is located just off the beach in Käsmu.  It is one of few wooden lighthouses in the Eastern Estonia, in the region known historically as Vironia.  The Lighthouse is operated by the Estonian Maritime Administration.

Käsmu men launched their local ship construction business during 1891.  To facilitate the movement of ship(s) in the region, the light beacon was built during that time.  Käsmu bay was one of the major ports for wintering, in some years of 60-70 ships.

The height of the Lighthouse was 8.2 meters and its visibility 6 miles.  Starting from 1900, the Käsmu Lighthouse worked with a blinking light.  In 1923, a signal mast was erected at the back of the Lighthouse for sending storm warnings to ships at sea.  The Lighthouse escaped without any damage both from World War I and II.

With its green, white and red lights, it gave the opportunity of safe entry into Käsmu Bay where ships could find shelter in stormy weather.  Käsmu Bay, for centuries, was considered the best shelter on the Tallinn-Narva shipping route.  In 1993, burning a light in the Lighthouse stopped and the Käsmu Lighthouse remained in the maritime register as a Day-Light until 2004 when it was removed from the navigation aids database.  The unique structure of the Lighthouse survives as a cultural heritage monument in the landscape.  The Lighthouse celebrates its 120th year in 2012.

The wooden Käsmu Lighthouse was commemorated by Eesti Post with the release of 0.45 euro stamp on 13-Sep-2012.  This is the 22nd stamp in the Eesti Post's Lighthouse Stamp Series.

Established in 1892, the Käsmu Lighthouse: