Farewell Spit is a narrow sand spit at the Northern end of the South Island of New Zealand.  It is the South Island's northernmost point and is the longest sandspit in New Zealand.  Farewell Spit Lighthouse is located at Bush End Point near the end of the spit.  The area is critically important bird nesting area and is closed to the general public.

Built in the year 1897, the FAREWELL SPIT Lighthouse:

In New Zealand, over the years the stamps were limited to the pre-payment of postage on correspondence posted by the Government Life Insurance Office for delivery within the country. But, on 27-Mar-1969, this condition was relaxed and the stamps could be used on mail to both inland and overseas addresses.


Built in the year 1878, the MOERAKI POINT Lighthouse:
Posted by K Sridhar at 9:59 PM No comments: 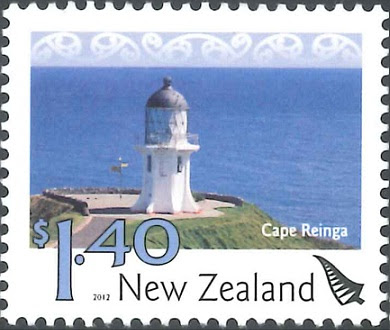 A popular spot for tourists, Cape Reinga is as far North in New Zealand's North Island.  Cape Reinga marks the point where the Tasman Sea meets the Pacific Ocean.

The Cape Reinga Lighthouse was commemorated by New Zealand Post with the release of $1.40 stamp on 23-May-2012 under the "Scenic Definitives Series 2012".

The details about the Lighthouse is available in my earlier post #0033...
Posted by K Sridhar at 2:45 AM No comments: 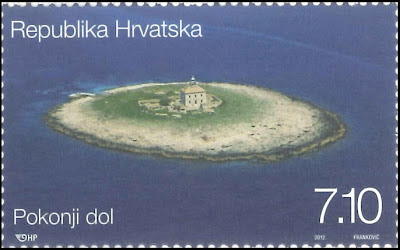 The combination of the white light beam from Pokonji dol along with the red flash beam from the nearby island of Jerolim guides the sea passage for the sailing ships.   The strong light beams marks the sailing route from the Islands of Korcula, Lastova and Susac towards the Hell's Islands.  The light is automated.


The Pokonji dol Lighthouse was commemorated by Croatian Post with the release of 7.10 HRK (Croatian Kuna) stamp on 31-May-2012. 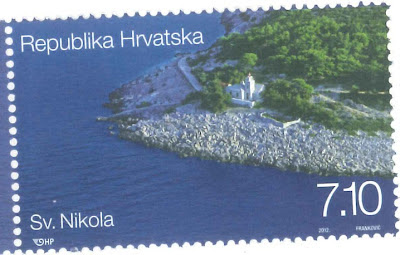 The St. Nicholas Lighthouse is one of the smallest Adriatic Lighthouse(s).  It is located on the biggest Dalmatian Island of Brač and in the Central part of the North coast of the Island.   The Lighthouse was built of the proximity of the quarry of Brac.

Initially, it was planned to built a huge stone Lighthouse, but due to the non-availability of workers, in 1882, a relatively smallest lighthouse was erected.   But, the strong Light lenses and the resulting light beam, guides the sailing ships to Pucisca.

The Lighthouse was automated in 1990s and since then only voyagers drop by.   Many tourists who spend their summer in Pucisca are not aware of this building - a valuable, cultural and historical monument at the outer promontory of the bay.  The light of St. Nicholas marks the only safe refuge to every day greater number of yachtsmen who cruise along the Northern coast of the Island of Brac.

The St. Nicholas Lighthouse was commemorated by Croatian Post with the release of 7.10 HRK (Croatian Kuna) stamp on 31-May-2012. 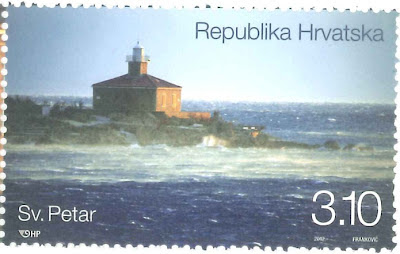 The Lighthouse is located on the tip of a forested peninsula and surrounded by one of the most beautiful nearby pebble beaches of the Adriatic Sea.

The Lighthouse was named after the promontory on which it was built.  The Lighthouse can be seen from all sailing directions because of the configuration of nearby coast.  Also, when seen from the sea, the unusual tower of the Lighthouse with the peaks of the Biokovo Mountain in the backgroud, seems even lower so that the Lighthouse resembles to a kind of wooden countryside living.

The St. Peter Lighthouse was commemorated by Croatian Post with the release of 3.10 HRK (Croatian Kuna) stamp on 31-May-2012. 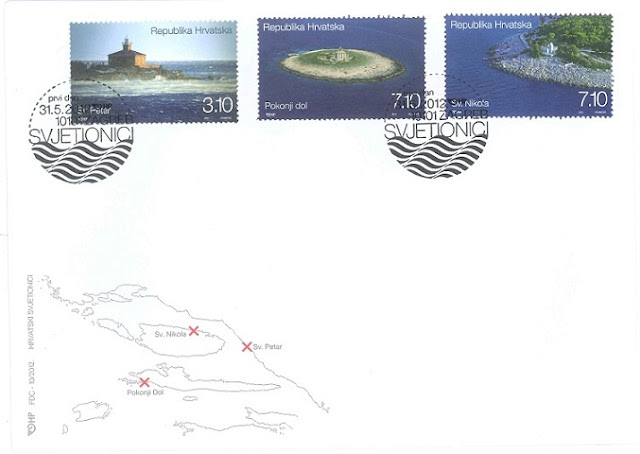 Croatian Post commemorated its Lighthouse(s) with the release of stamp(s) on...

The detail(s) about these Lighthouse(s) will follow in my next post(s)...
Posted by K Sridhar at 12:00 AM No comments: 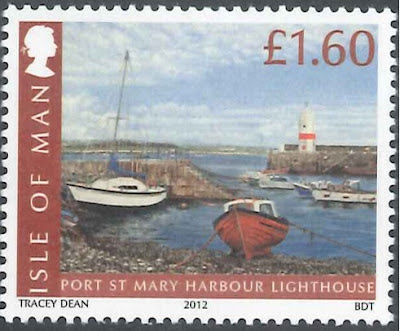 The Lighthouse is located at the end of the inner pier of Port St. Mary, which is on the South-Western part of the Isle of Man.  The Port St. Mary has two harbour(s), the inner harbour with its pier created in 1812 and the outer harbour when Alfred Pier was built in 1882.

The Port St. Mary Harbour Lighthouse:
Posted by K Sridhar at 1:55 AM No comments: 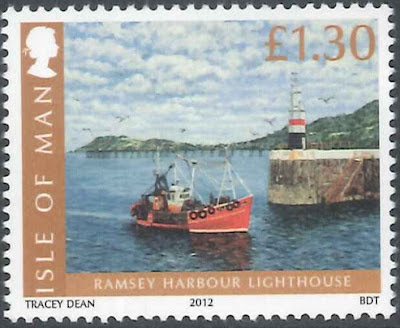 Ramsey is the main town in the North and is the second largest town on the Isle of Man.  There is an attractive working Ramsey harbour.  The Ramsey North Pier and South Pier Lighthouse(s) are located at the end of two parallel piers at the entrance to Ramsey Harbour.  The South Pier was extended in 1876.

The Ramsey Pier Lighthouse was commemorated by Isle of Man Post Office with the release of £1.30 (Manx Pound) stamp on 2-Apr-2012 under Harbour Lights (Minor Lighthouses around the Isle of Man). 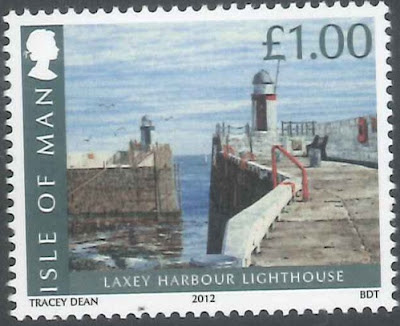 About 10 km North-East of Douglas, the two Lighthouse(s), the Laxey Breakwater and Laxey Pier are located.  The Harbour of Laxey owes its origin to the lead mining industry.  The commissioning of a breakwater was started in 1890 and completed in 1893.   The Laxey Breakwater Lighthouse was on the seaward end and the Laxey Pier was the smaller inner light on the end of Rowe's Pier.

The Laxey Breakwater and Laxey Pier Lighthouse(s) were commemorated by Isle of Man Post Office with the release of £1.00 (Manx Pound) stamp on 2-Apr-2012 under Harbour Lights (Minor Lighthouses around the Isle of Man). 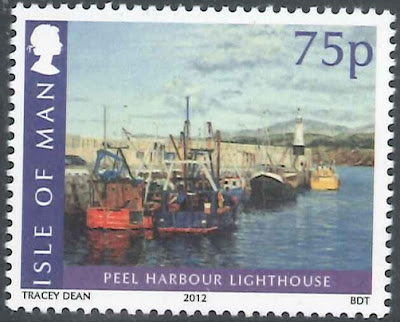 Built in 1896, the Peel Breakwater Lighthouse: 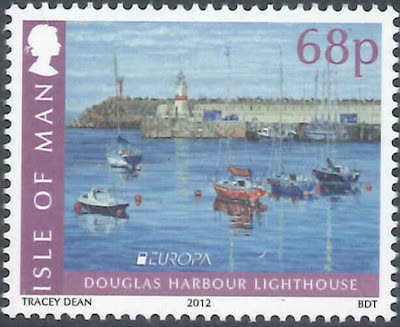 The Battery Pier Lighthouse is located on the Eastern end of the outer breakwater for the Douglas Harbour.  The Lighthouse was completed in 1876.

The Battery Pier Lighthouse (Douglas Harbour) was commemorated by Isle of Man Post Office with the release of 68p stamp on 2-Apr-2012 under Harbour Lights (Minor Lighthouses around the Isle of Man). 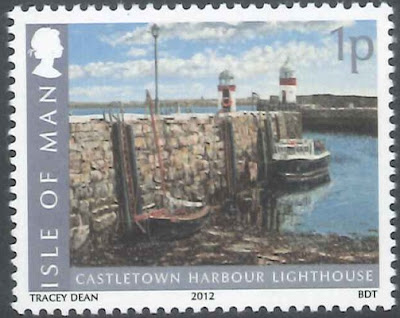 Castletown in Isle of Man, is a heritage harbour which has an Outer and Inner drying harbours. The harbour is mainly used by inshore fishing vessels, pleasure craft and occasional coasters.  The Castletown Harbour Lighthouse hosts two Lighthouse(s) viz., Castletown Irish Quay and Castletown New Pier.

The outer harbour at Castletown is protected by a small breakwater on the end of which is a superb limestone built lighthouse, Castletown New Pier.  The Lighthouse was built when Castletown was the capital of the Island and the harbour was more important than now.

The approach to the inner harbour carries a smaller Lighthouse, Castletown Irish Quay. The Lighthouse was referred to as "Pepper Pot" Lighthouse. 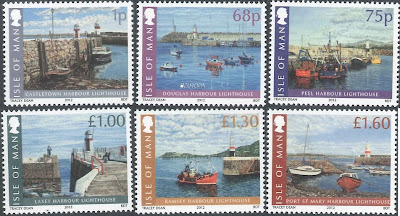 Isle of Man Post Office commemorated its Harbour Lights (Minor Lighthouses around the Isle of Man) with the release of stamp(s) on...

The detail(s) about these Lighthouse(s) will follow in my next post(s)...
Posted by K Sridhar at 9:16 PM No comments:
Newer Posts Older Posts Home
Subscribe to: Posts (Atom)