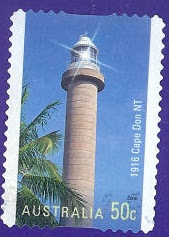 The Cape Don Lighthouse is an active Lighthouse located on Cape Don, at the tip of the Cobourg Peninsula.  It marks the entrance to the Dundas Strait.  It is Australia's Northernmost traditional Lighthouse.  It served on the important route to Darwin between the peninsula and Melville Island.
The tower was constructed during the Golden Age of Australian Lighthouses (1913 - 1920).
The light apparatus was converted to a Tungsten-Halogen Electric Lamp in 1970.  In 1983, the Lighthouse was automated with a high intensity light powered by Solar cells.   Subsequent to automation, the lighthouse as demanned.
It was named to compliment General Sir George Don, the Lieutenant-Governor of Gibraltar.
The Northern Territory Cape Don Lighthouse was commemorated by the Australia Post by the release of 50c stamp on 2-May-2006.
Built in the year 1917, the CAPE DON Lighthouse:
Posted by K Sridhar at 3:49 AM No comments: 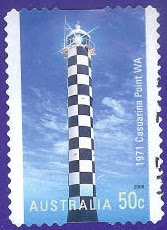 Built in the year 1970, the CASUARINA POINT Lighthouse: 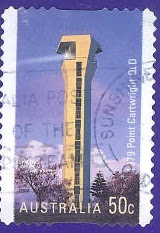 The Point Cartwright Lighthouse is a modern, high-tech tower which replaced the Caloundra Head Light as the major Coastal Light on the Northern approaches to Brisbane.  The Lighthouse is located near the mouth of the Mooloolaba River.
The Queensland Point Cartwright Lighthouse was commemorated by the Australia Post by the release of 50c stamp on 2-May-2006.
Built in the year 1978, the POINT CARTWRIGHT Lighthouse:
Posted by K Sridhar at 3:46 AM No comments: 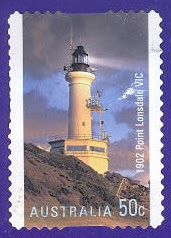 The Point Lonsdale Lighthouse guards The Rip, the narrow entrance to Port Phillip Bay, Melbourne's Harbour.  The Lighthouse is located on the West side of the bay entrance off Flinders St. in Queenscliff.

The Victoria Point Lonsdale Lighthouse was commemorated by the Australia Post by the release of 50c stamp on 2-May-2006.
Built in the year 1902, the POINT LONSDALE Lighthouse:
Posted by K Sridhar at 3:45 AM No comments: 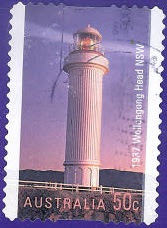 The Wollongong Head Lighthouse, also known as the Flagstaff Lighthouse, is located in Wollongong, a coastal city South of Sydney.  The Lighthouse overlooks the Tasman Sea.  Wollongong is the only place in the East of Australia to have 2 (two) lighthouses located in close proximity to each other, the other being Wollongong Breakwater Lighthouse.
The Lighthouse guides the maritime traffic into Port Kembla Harbour located to the South.  It was the First lighthouse in New South Wales but also the first to install fully automatic flashing lights and it is listed as a Heritage building in Australia.  The lighthouse stands on the Eastern side of Flagstaff Point.
The New South Wales Wollongong Head Lighthouse was commemorated by the Australia Post by the release of 50c stamp on 2-May-2006.
Built in the year 1936, the WOLLONGONG HEAD Lighthouse: 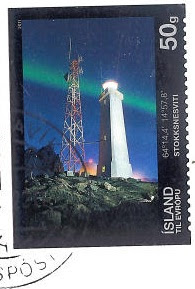 Built in the year 1946, the STOKKSNES Lighthouse:
Posted by K Sridhar at 2:58 AM No comments: 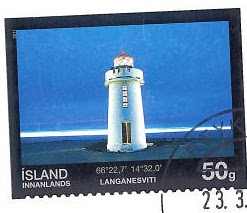 The Langanes Lighthouse is located in the long, narrow peninsula of the North-Eastern corner of Iceland.   The Lighthouse marks the end of Langanes.  The lantern and gallary of the Lighthouse are of Swedish make.  The lighthouse protects the navigators from great hazard in the region.


Iceland Post commemorated the Langanes Lighthouse by releasing a stamp on 17-Mar-2011 and it is valued in Icelandic Krona 75 for domestic 50g.
Built in the year 1950, the LANGANES Lighthouse:
Posted by K Sridhar at 2:57 AM No comments: 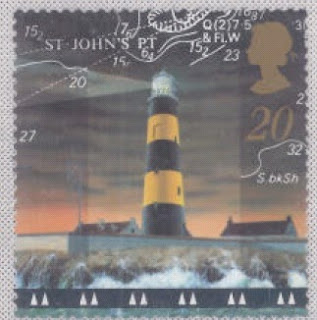 The St. John's Point Lighthouse is located on the rocky North-East coast of Ireland and to the South of Killough, marking the entrance of Dundrum Bay.  It is one of the most complete Light Stations surviving in Ireland.

The original Lighthouse station consisted of a 45 feet high tower, painted White.  The light was estabilished in May 1844 with an occulting character (45 sec. illuminated and 15 sec. dark). On July 1860, the light was changed from White to Red.

In 1954, the colour of the tower was changed, this time to Black with two yellow bands.  In Feb 1981, the main light was converted to electric and an electric horn fog signal replaced the siren.  In May 1981, the Lighthouse was fully automated.

From Jan 1982, the character of the auxillary light was changed from fixed to flashing White and Red every 3 seconds.

On 24-Mar-1998, Great Britain commemorated the St. John's Point Lighthouse by releasing a 20p stamp.  The band at the foot of the stamp shows the Lighting characteristics [Group quick flashing x 2].