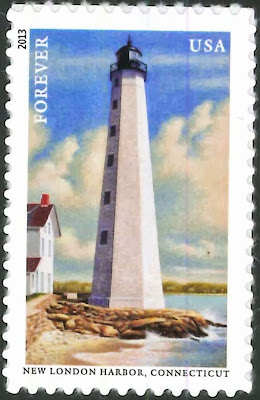 The glory days early in the country's history the New London was the 3rd busiest whaling port.  The busy port attracted several immigrants, leading to the beach area near where the lighthouse stands being used as quarantine ground in the 1750's for recent arrivals to the New World infected with smallpox, a recurring problem at the time.

In 1760, a committee was pursued for the funding, construction and staffing of a new lighthouse for the harbor entrance at New London.  The following year, the lighthouse, a 64-foot stone tower with a wooden lantern at the top, was finished at the West side of the harbor entrance.  It was the 1st lighthouse in the harbor and only the 4th to be built in the American colonies.

But by 1800, the lighthouse had a crack extending 10 feet down from the lantern.  In addition, the light was so dim as to often be indistinguishable from the lights of the surrounding homes.  A replacement light, in 1800, a New Londoner by the name of Woodward began construction on the current octagonal, tapered 80-foot tower.

Sitting on a foundation of a mixture of granite, brownstone, and native stone, the tower was built of freestone, hammered smooth and laid in courses. The walls were nine inches thick and lined with brick inside. A wooden spiral staircase led up to the lantern room.

When the new station was opened in 1801, its flashing light was produced by oil lamps and an eclipser.  This apparatus was replaced in 1834 by eleven lamps with 14-inch reflectors.  Finally, a 4th order Fresnel lens, which remains in the lighthouse today, was installed in the late 1850's.

The New London Harbor Lighthouse is not the easiest lighthouse to visit, as the keeper’s house and surrounding ground is privately owned.  Limited views are available from the sidewalk on Pequot Avenue, but the best views are from the water. In October 2009, the New London Maritime Society became the new legal steward of the New London Harbor Lighthouse, after the Coast Guard excess-ed the tower through the National Historic Lighthouse Preservation Act of 2000.  A formal transfer ceremony was held at the lighthouse on October 13, 2010, wherein the deed for the lighthouse was presented to the New London Maritime Society. The tower and surrounding land, however, remains off-limits to the public except during special tours offered by the society.

USPS commemorated the New London Harbor Lighthouse (State of Connecticut) by the release of  a Forever stamp on 13-Jul-2013 in its US New England Coastal Lighthouse Stamp Series-2013 (6th Lighthouse Series).

Established in the year 1761, the New London Harbor Lighthouse:
Posted by K Sridhar at 4:00 AM No comments: 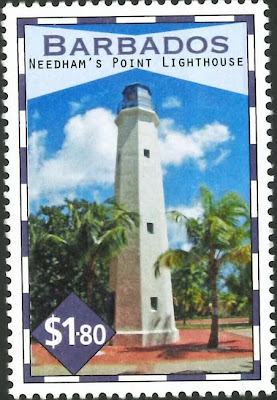 The stationary nature of the lights allow sailors to know whether they were near the port or starboard side of Carlisle Bay.


The Needham's Point Lighthouse was commemorated by Barbados Postal Service with the release of a $1.80 stamp on 13-Jun-2013. 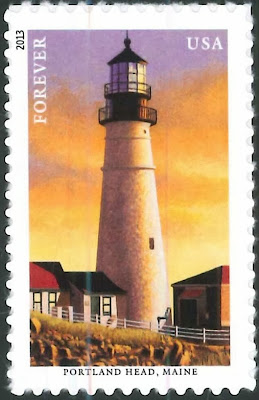 The State of Maine, located in the North-Eastern corner of USA has rugged, deeply indented coast with about 70 lighthouse(s).  Portland Head Lighthouse is located at the entrance to Portland Harbor in Maine.

As the trade was burgeoning in the town of Portland, the need of a lighthouse was felt and the first lighthouse completed by the US Government after it assumed control of lighthouse(s) in 1789 and the lighthouse was the most visited, painted and photographed lighthouse in New England.

USPS commemorated the Portland Head Lighthouse (State of Maine) by the release of  a Forever stamp on 13-Jul-2013 in its US New England Coastal Lighthouse Stamp Series-2013 (6th Lighthouse Series).

Built in the year 1791, the Portland Head Lighthouse:

Due to countless twists and turns, the exact length of the New Zealand's coastline is impossible to measure.  But, it's estimated to be between 15000 and 18000 kilometers.  Although the North Island is smaller than the South Island, it has a longer coastline due to numerous inlets, bays, harbors, flords and estuaries.

The New Zealand's coastline has numerous lighthouse(s) that play a key role in keeping the ships safe from harm.  The year 2013 marks the 100 years of the development of New Zealand's Maritime Radio Service.  And, also, the year marks the centenary of the Castle Point Lighthouse on the Wairarapa coast.

The detail(s) about the Castle Point Lighthouse is available in my earlier post #0181... 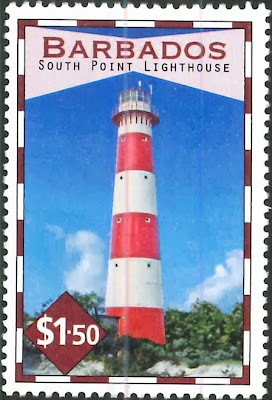 The South Point Lighthouse was commemorated by Barbados Postal Service with the release of a $1.50 stamp on 13-Jun-2013.

The detail(s) about the South Point Lighthouse is available in my earlier post #0018...
Posted by K Sridhar at 11:07 PM No comments: 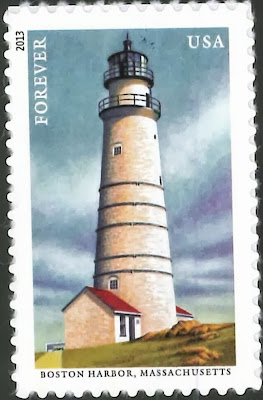 Boston Harbor Lighthouse stands over one of the oldest and most important harbors on the Eastern Seaboard, south side of Little Brewster Island.  The lighthouse is flanked by White clapboard keeper's house, a picturesque oil house and a fog signal building.  It is the second oldest U.S. lighthouse (after Sandy Hook Lighthouse, New Jersey).

USPS commemorated the Boston Harbor Lighthouse (State of Massachusetts) by the release of  a Forever stamp on 13-Jul-2013 in its US New England Coastal Lighthouse Stamp Series-2013 (6th Lighthouse Series).

Built in the year 1716, the Boston Harbor Lighthouse: 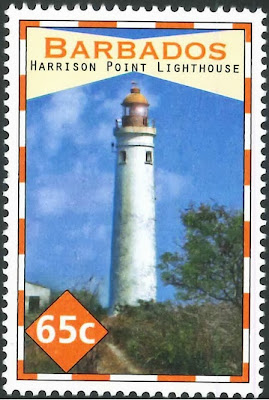 Harrison Point Lighthouse is an endangered Lighthouse located at the North-Westernmost point of the Barbados Island.  It is one of the four historic Lighthouses in the island nation.

The Harrison Point Lighthouse was commemorated by Barbados Postal Service with the release of a 65 cents stamp on 13-Jun-2013.