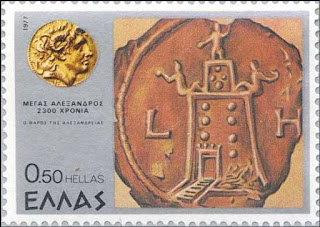 Greece commemorated the Lighthouse of Alexandria with the release of a 0.50 drachma stamp on 23-Jul-1977 to commemorate the 2300th Death Anniversary of Alexander the Great.
'Pharos of Alexandria', a tower built in the 3rd century on the island of Pharos in Alexandria, Egypt to serve as the port's landmark and later, its Lighthouse.

It was one of the tallest man-made structures in the World for may centuries and was regarded as one of the Seven Wonders of the Ancient World.

The first Ptolemy (Ptolemy I Stoter) initiated the construction of the lighthouse shortly after the death of Alexander the Great.  The lighthouse was finished during the reign of Second Ptolemy (Ptolemy II Philadelphus).
Posted by K Sridhar at 3:48 AM 3 comments:
Newer Posts Older Posts Home
Subscribe to: Posts (Atom)