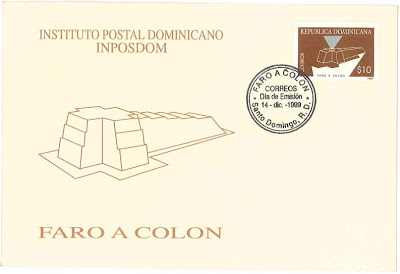 The Columbus Lighthouse (Spanish : Faro a Colon) built in 1992 is located in Santo Domingo, the capital of Dominican Republic.  It's a monumental 203.5 m Lighthouse built as a memorial to Columbus.  The huge building is shaped like a cross, its wings stepped back with increasing height like a Pyramid.
There is no navigational beacon in the usual sense.  The most outstanding and unique feature is the lighting system composed of 149 searchlights and a 70 kilowatt beam that circles out for nearly 44 miles.  When illuminated, the lights project a gigantic cross in the sky that can be seen as far away as Puerto Rico.
The monumental Lighthouse was inaugurated on October 6,1992, the day Columbus's "remains" were transferred from the cathedral.
Dominican Republic commemorated the Columbus Lighthouse (Faro a Colon) with the release of $10 Stamp and Cover.
Posted by K Sridhar at 9:00 AM No comments: 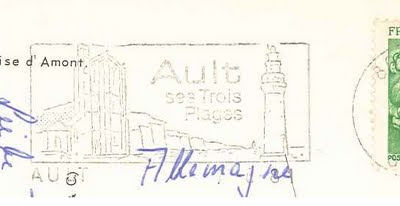 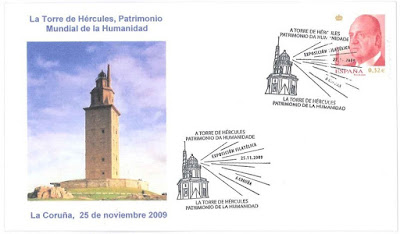 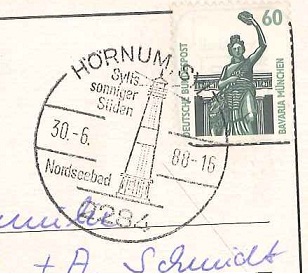 The picture cancellation released by Germany depicts the Hornum Sylt Lighthouse.
Sylt is a barrier island facing due west on the North Sea.  The island has been connected to the mainland by a causeway.  The causeway carries a rail line, which is popular way to reach the island's many beach resorts.
The Lighthouse is located atop a dune on the South-East side of the Sylt in the village of Hornum.  It's a beautiful and popular lighthouse, sibling of the Pellworm and Westerhever Lighthouse(s).
Built in the year 1907, the Hornum Sylt Lighthouse:
Posted by K Sridhar at 11:46 PM No comments: 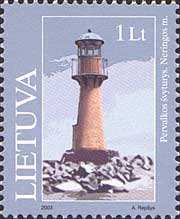 Admiralty Head Lighthouse was located on the Western edge of Whidbey Island.  The first Admiralty Lighthouse (known as Red Bluff Lighthouse) was built on the headland during 1860.  The Lighthouse had a 2-story wooden structure and the lantern room contained a 4th order Fresnel lens.

The Lighthouse guides ships bound from Pacific to Seattle which pass along the San Juan de Fuca strait.  The Admiralty Lighthouse defines the entrance to Admiralty Inlet from the strait on the east. The Lighthouse is placed at the right place to guide shipping.

The present day Lighthouse was built in a Spanish style and included a 2-story keeper's house.  The Lighthouse was extinguished in 1922, as the modern vessels powered by steam hug the western side of the inlet.  The lantern was removed and placed on the New Dungeness Lighthouse.

USPS commemorated the Admiralty Head Lighthouse (State of Washington - US Western Coast) by the release of  25c stamp on 26-Apr-1990 in its Lighthouse Stamp Series-1990.

The 1990 Lighthouse Stamp series is to commemorate the US Coast Guard Bicentennial and US Lighthouse Service and also the series represented one Lighthouse from each of the main coastal regions in the United States.


Built in the year 1903, the Admiralty Head Lighthouse:

New Zealand Government Life Insurance Department in 1890 was allowed to use a distinctive stamp of its own.  This made the office unique in-so-far as no other Life Insurance Institution in the World enjoyed such a privilege.

Built in the year 1884, the Kolka Lighthouse:


Built in the year 1888, the Dornbusch Lighthouse:
Posted by K Sridhar at 3:20 AM No comments:
Newer Posts Older Posts Home
Subscribe to: Posts (Atom)