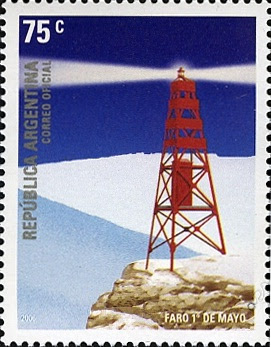 The De Mayo erected by Argentina in 1942 was the first Argentine Lighthouse in the Antarctic.

Argentina Post commemorated the De Mayo Lighthouse by the release of 75 Argentine Centavo stamp under its Argentina Lighthouse Series-III on 18-Mar-2006.
Posted by K Sridhar at 9:02 PM No comments: 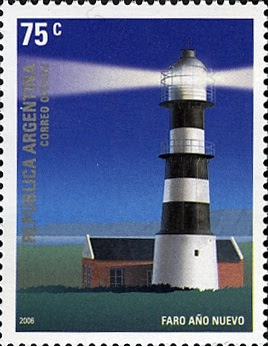 The Año Nuevo Lighthouse built with British support in connection with Antarctic expeditions and this Lighthouse is declared a National Historic Monument.  This building near the Lighthouse tower housed a Meteorological and Geophysical Observatory.  The Observatory was staffed continuously from 1902 to 1919.

Argentina Post commemorated the Año Nuevo Lighthouse by the release of 75 Argentine Centavo stamp under its Argentina Lighthouse Series-III on 18-Mar-2006.

Built in 1902, the Año Nuevo Lighthouse:
Posted by K Sridhar at 3:56 AM No comments:
Newer Posts Older Posts Home
Subscribe to: Posts (Atom)